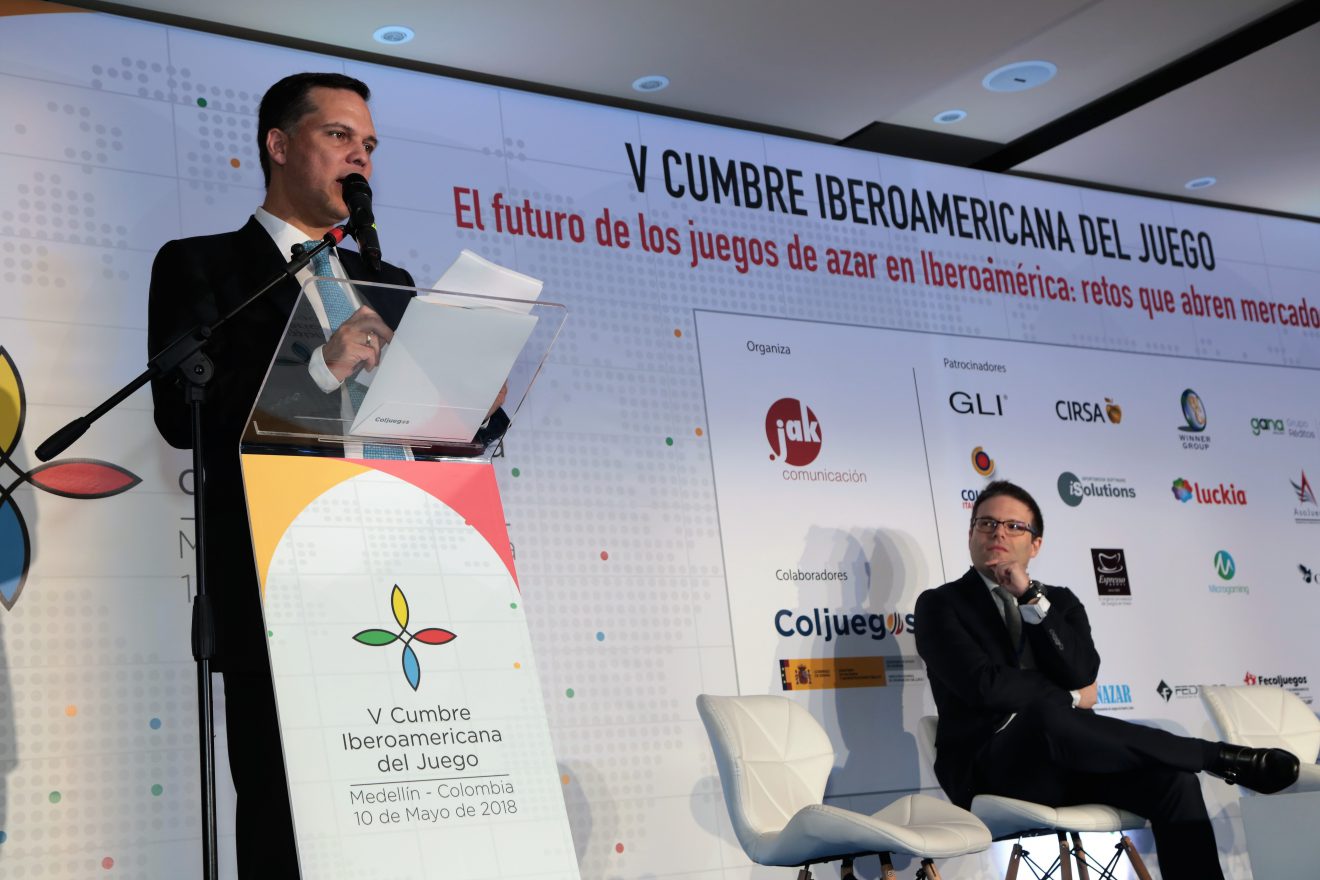 More than 200 attendees were in Colombia on May 8, 9 and 10 to celebrate the V Iberoamerican Gaming Summit a meeting that, after four successful previous editions held in Madrid (I and II), Mexico City (III), Cartagena (IV) has been held in the Antioquia city of Medellin (V).

The president of Coljuegos, Juan B. Pérez Hidalgo, presided over Thursday the V Iberoamerican Gaming Summit 2018, ‘The future of games of chance in Ibero-America: challenges that open markets’, in which the regulators of gaiming of Spain, Panama, Argentina, Peru, Paraguay, Puerto Rico, Portugal, Uruguay, Dominican Republic, Curacao, Colombia and for the first time, since its recent appointment, Mexico represents a strategic market of great relevance for the industry of gaming.

Ten days after the celebration of the fifth edition of this important forum of the international gaming sector, composed of three days of activities with regulators, businessmen and associations of the sector, the photographs and the video summary of the event are now available.

The high commitment shown by all participants in this meeting, which for the third time leaves Spain, consolidates the Ibero-American Game Summit as a reference meeting, with a marked institutional, for the promotion of relations between Europe and Latin America

The regulators of these 12 Ibero-American countries that have participated in this fifth edition of the Summit have ratified their commitment, support and interest in generating and strengthening communication among all the actors in the sector, as well as discussing the current situation of the industry and exchanging ideas and experiences with the aim of strengthening relations between gambling companies and government entities.

In this meeting, the Summit again had a dynamic format, with more than 25 speakers who discussed the most relevant issues for the sector from an Ibero-American point of view. Through different round tables and presentations, participants had the opportunity to share experiences and present success stories from the perspectives of each of their countries.

“This summit could not have been more opportune for the moment that our industry is experiencing. Thanks to the joint work between the National Government and the private sector, we turned Colombia into a model of regulation that contributed to the growth of games of chance and luck. This has resulted in the generation of greater social benefits for Colombians: A collection for exploitation rights, which has grown 35% in the last two years, with which $ 1.5 billion has been transferred to the subsidized health system ” said Pérez Hidalgo.

In the words of Juan Espinosa, General Director of Gaming Regulation of Spain, a contributor to this forum from the beginning, “from the DGOJ we are satisfied with the principles of collaboration between the regulators of the different jurisdictions that were established in past editions of The Ibero-American Gaming Summit not only continues to be valid, but has also made progress in establishing a continuous management of knowledge of the different realities of the different gaming markets.

In this sense, it has been proven that the main points of common interest are focused on the attraction of the demand towards the legal offer of the game and the fight against illegal gaming, the elaboration of public policies of responsible gaming, as well as the contribution of the sector in the defense of the integrity of sport, all of which are the main objectives for the establishment of a socially sustainable sector. ”

The conclusions of the Fifth Ibero-American Gaming Summit were included in an institutional declaration made public last May 12.

The Ibero-American Gaming Summit is consolidated as an annual meeting of great strategic importance, which provides the opportunity to closely monitor the news and milestones of the sector, while promoting networking and promote the emergence of synergies in the market.

Given the great interest shown by the participants, a new annual meeting of the Ibero-American Gaming Summit is expected in another Ibero-American market in 2019, specifically Peru will be the venue chosen to host this international forum.

Once again, the organization of the Ibero-American Gaming Summit is in charge of JAK Comunicación and the support of the Ministry of Finance and Public Administrations of Spain through the General Directorate for the Regulation of Gaming.